150,000 Plastic Bottles Not Hanging on the Ocean Floor

Late last year we had the pleasure of installing a couple of Halsey Taylor drinking bottle filling stations at Guy’s and St. Thomas’ hospitals. The units were donated to the organisations by MIW, as part of the work that we’ve undertaken for the #OneLess Project and the London Drinking Fountain Fund. We were always confident that the bottle fillers would find a welcome home at the hospitals. What we were less certain of is how much they were likely to be used. Are people prepared for the refill way of life? Would they be willing to use a bottle filler or drinking fountain? How many people would even notice the units were there? Well, we now have answers to all of those questions, and the news is very, very good.

The first of Guy’s and St. Thomas’ bottle filling stations was installed in September 2018. Thanks to a specially designed 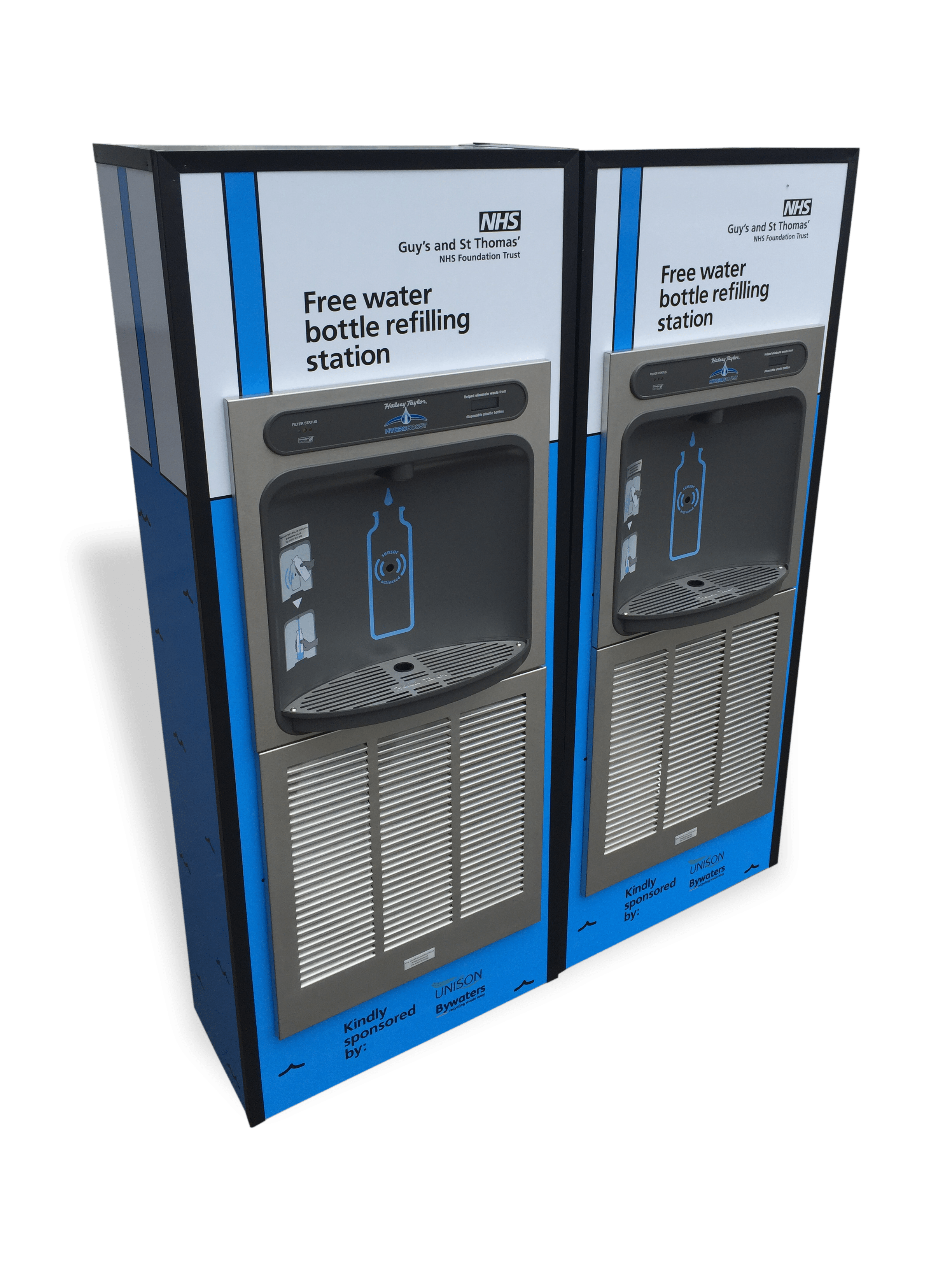 counter installed on that first unit, we were able to monitor how much it was used. Not just the overall amount of water that was processed by the filler, but the number of people who used it. In just the first three months, between October and December, before it became a known fixture of the hospital, the test unit was used a staggering 9,500 times. That’s more than 105 times a day!

Based upon the litres of water consumed during the trial period, it is now estimated that each bottle filler will cater for at least 38,000 bottles per year. With four bottle fillers now in place across the two hospitals, that’s a total saving of 150,000 single-use bottles on a yearly basis. Or, as we like to think of it, 150,000 plastic bottles not littering the ocean floor.

Why so Many Organisations are Saying Goodbye to Plastic

There’s been a huge focus on plastic waste in the last few years. And the main reason for this is because it’s important. Across the globe, we get through a frightening amount of plastic every year. We’ve now reached the stage where 8 million tonnes of the stuff finds its way into the world’s oceans annually. And once there, it doesn’t go anywhere… Other than into the food chain. Marine species eat it or get trapped in it. If it doesn’t kill them directly, they get consumed by something else, and that creature in turn has to deal with a plastic-filled diet. Some scientists believe that this could lead to mass extinction and the emptying of our waterways.

Thanks, in part, to public pressure, there is a growing momentum to instigate chance. As part of that, responsible organisations are taking steps to reduce their plastic consumption. And the easiest way to remove a problem is to provide an alternative. That’s what Guy’s and St. Thomas’ are doing with their new bottle fillers. That’s what we’re doing at MIW, with our support of the #OneLess campaign.

I usually end these blogs stating that now the bottle fillers are there, we just need people to start using them. Now, however, we know that they are. And if we can prevent the use of 150,000 plastic bottles by putting bottle filling stations in just two hospitals, imagine what we could achieve if they went into every hospital. Into every public organisation and accessible space! Now there’s a will it’s time to provide a way. So, let’s finish on a question:

Where are you going to put your company’s bottle filler?