Case Study – The University of Chester Single use Plastic Reduction

Overview: 20,000 single-use plastic drinks bottles are purchased every second[1]. Less than 50% are collected for recycling. This means that the majority pollute the environment, either taking up landfill space, or ending up in our waterways. Researchers estimate that more 8 million tons[2] of plastic reach the ocean every year, where it releases toxic chemicals, such as BPA[3], and is detrimentally ingested by sea life, before eventually making it into the human food chain. The most common items of litter now found in the ocean are plastic[4]. Recent publicity around the issue has seen a growing number of people and organisations wishing to take action to reverse this scenario.

With the growing emphasis on plastic waste, students and staff of UoC wanted to take steps to tackle the University’s plastic waste, instilling a culture which prioritised the reduction, re-use and recycling of plastic waste[6].

Solution: Reducing the prevalence of single-use plastic bottles sold, used and placed in general waste disposal bins on UoC campus became a priority. The provision of free-to-use drinking water fountains was a key part of the solution. 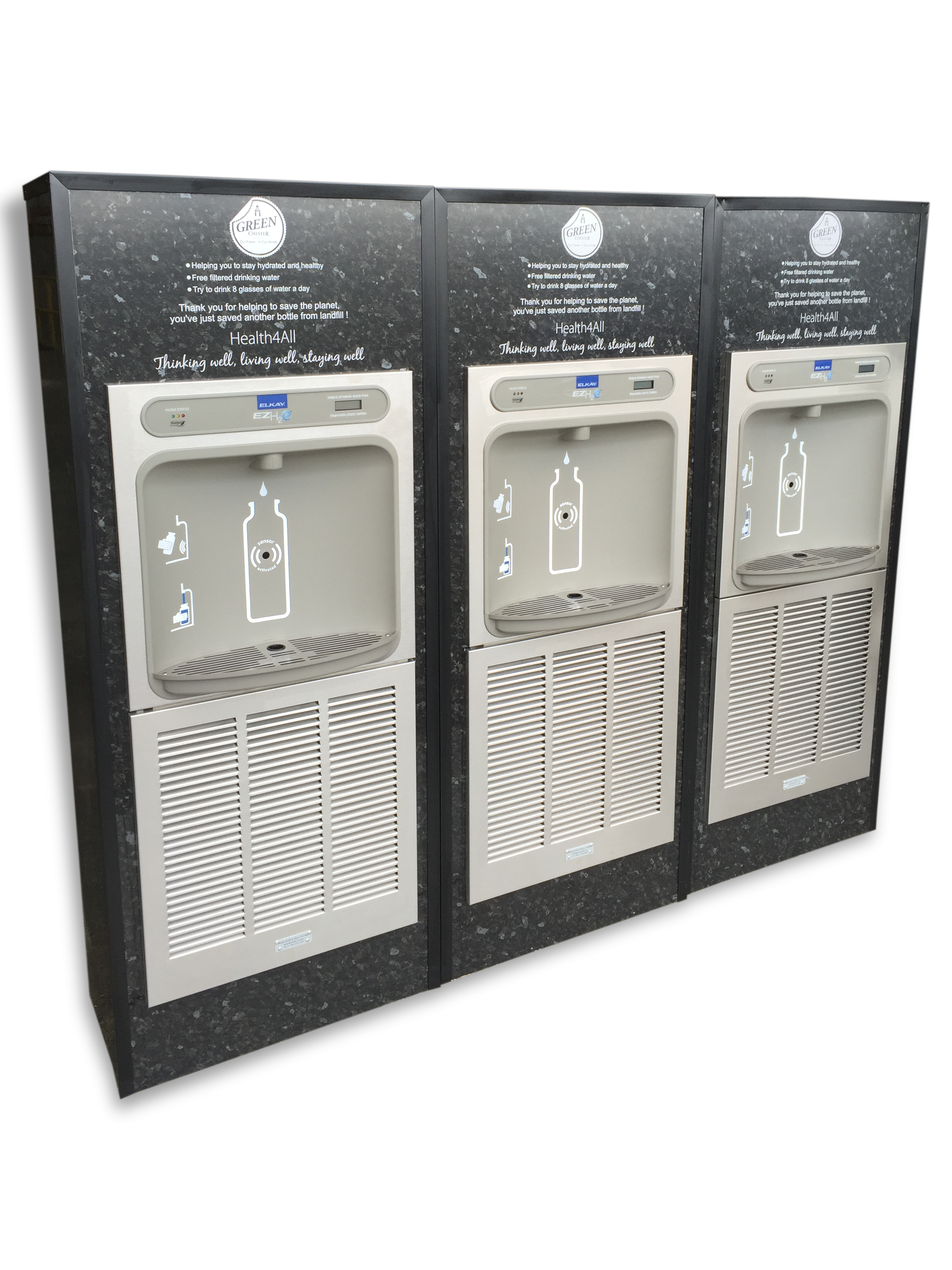 On January 4th 2016, the first of19 driking water refill stations was installed on UoC campus by MIW Water Cooler Experts. The 19 Eco-Dispenser HTHB-1500-42 chilled bottle filling stations were selected to provide students and staff with access to fresh, cool drinking water wherever they are on campus. The ultimate aim was drawing people away from the purchasing of drinks, and the associated plastic waste this creates.

Results: Since the first bottle refill station was installed at The University of Chester it has been in constant use. An electronic bottle counter installed on each unit, recording every 500ml of water dispensed, revealed that during this time, through the drinking fountain provision, the University has prevented approximately 500,000 bottles from going to landfill. If all of these unused bottles were laid out together, there would be enough to fill 1.2 Wembley football pitches.

A 500ml PET bottle weighs approximately 10 grams. This means that in real terms, the UoC has saved in the region of 5 tonnes of plastic waste from needing to be disposed of. This is a significant result for a limited investment of funds and effort. The UoC is justifiably very pleased in seeing such a dramatic reduction in waste plastic bottles generated throughout the organisation.

Nick Dudley, The Facilities Administration Assistant for the University of Chester, comments: “Staff and students enjoy ‘doing their bit’ by reusing bottles… One of our machines saved 66,000 bottles in the space of 12 months, which is fantastic.”

If all of the UK’s 130 universities were to adopt UoC sustainability policy and methods, in excess of 650 tons of single-use plastics could be saved every year.

[5] The University of Chester – https://www.chester.ac.uk/sites/files/chester/Sustainability_policy_2016-17%20.pdf

[6] Nick Dudley, The Facilities Administration Assistant for The University of Chester