Earlier this year, you may remember, I had the pleasure of announcing MIW Water Cooler Experts’ involvement in the London Mayor’s plan to provide free drinking water on the city’s streets. Working with the #OneLess bottle campaign, and as the UK’s leading authority on outdoor drinking fountains,  MIW has been providing expert advice on the what, where and how of street level public water provision. In addition, we’re providing 20 free sports bottle refill stations to get the project going.

It’s something that I’ve been enthused about from the off. The recent public engagement with the campaign to reduce single-use plastics has been enormously encouraging. Having the chance to further facilitate that movement feels like a real privilege. After all, it’s not very often that you get the chance to do something that could make a real difference and have a lasting, positive effect on both the environment and society. Because of this, for the last few months, I’ve been a bit like a kid waiting for Christmas. But the good news is that Christmas finally came… In the third week of March. That’s when the first bottle refill station of the project was installed, in Kingly Court, Carnaby Street. 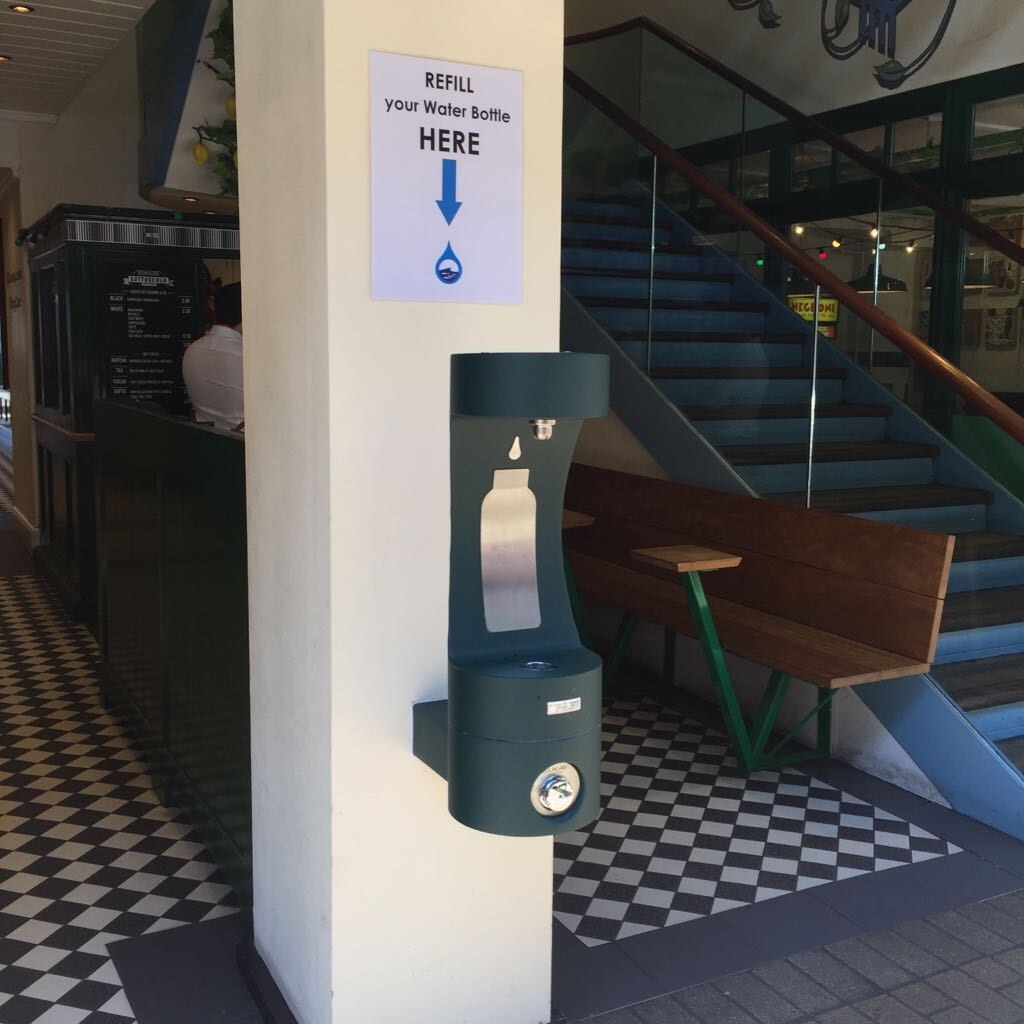 Kingly Court (owned by Shaftesbury Land), was chosen as the site for the inaugural unit because it’s both central and hugely busy. Appealing to both Londoners and tourists, Carnaby Street is one of the West End’s key attractions. It is always busy, and therefore offers real potential to reduce plastic waste with the provision of free water.

For this site, we decided to that the Elkay EZH2O LK4405BF bottle filling station was the best possible fit. It’s user-friendly, hygienic and capable of dealing with high demand, delivering 500ml of water in just 7 seconds. It looks smart too, working well with the Kingly Court aesthetic. It’s also weather-resistant and vandal-proof, so damage – accidental, or otherwise – should never be a problem. This model has already proven its worth in London’s Borough Market, where MIW installed it in August 2017, so it’s definitely capable of contending with the Carnaby challenge. Like all MIW outdoor drinking fountains, the Elkay EZH20 is WRAS-approved (Water Regulations Advisory Scheme), so it’s been thoroughly tested for suitability for public use.

For this project, it’s important to find out exactly how much the bottle filling station is used. The GLA, the #OneLess campaign and other councils around the country all want to know how many plastic bottles have potentially been prevented from being used through the provision of the station. With this in mind, the Elkay EZH20 has been modified to record usage data. Hopefully it will help in the furthering of such schemes across the UK. I’m so looking forward to receiving the first batch of data!

Kingly Court is known as a gourmet paradise these days. I’ve got a hunch that the London gourmand is about to develop a taste for water.