27 green acres. At least ten diverse organised sporting facilities. Endless opportunities for independent exercise. Duck pond. Play equipment. Rose garden. Bandstand. Café. And toilets. Paddington Recreation Ground in the heart of the City of Westminster seemed to have it all. In December 2018, MIW installed a fancy new outdoor bottle filler and drinking fountain there. So now, it does!

This, of course, is all part of MIW’s work with the London Drinking Fountain Fund. Working in tandem with the London Mayor’s Office and the magnificent #OneLess bottle campaign, we have spent much of the last year plotting and planning the installation of 20 free-to-use bottle fillers and drinking fountains across the capital. And in the last few months we’ve seen a slew of installations, as worthy locations have been settled upon. Paddington Recreation Ground is one them. 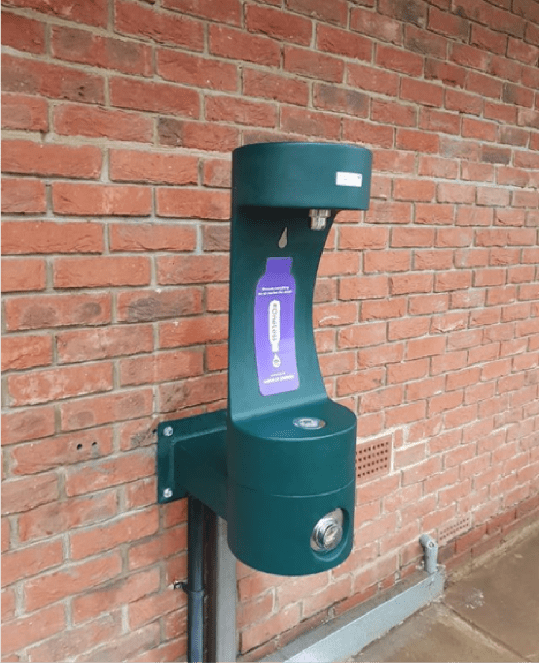 Opened in 1888, Paddington Recreation Ground was one of the first free-to-use public green spaces in the City of London. It began life as a Victorian work creation scheme; its primary purpose being to get people back to work after a heavy economic slump. It soon became a focal point for local leisure activities. And 130 years later, it attracts more than 1.5 million visitors a year. That’s more than the number of people who actually lived in the whole of London in 1800. Which is quite a staggering statistic.

And it’s this extraordinary visitor figure that made Paddington Recreation Ground such a perfect choice for involvement in the London Drinking Fountain Fund.

It’s estimated that Londoners get through 1 billion single-use plastic bottles of water every year. And, unfortunately, many of those bottles never make it to a recycling plant, ending up in landfill, or worse, our waterways. We’ve reached the stage where our planet is beginning to choke on plastic. While we can’t get rid of all plastic used in everyday life, we CAN reduce the amount of disposable plastics that we all consume. Replacing shop bought bottled water with refillable bottles and a series of easy to access fillers is the first step along that road. And it’s no small step either; just imagine what 1 million plastic bottles looks like! Take that out of our ecosystem every year, and that’s an enormous change for the good. Make that change in every city across the UK, and the results could be phenomenal.

The new Halsey Taylor 4405BF Endura II Tubular outdoor bottle filler has been selected to meet the high footfall of Paddington Recreation Ground. It’s easy to use, low-maintenance, and both weather-proof and vandal-resistant. Filtered and treated with silver ion anti-microbial protection, it’s been designed to deliver fresh, hygienic and good-tasting water on demand.

Paddington Recreation Ground has always had a lot to offer. Now, we think that it can claim to have it all.