MIW’s work with the #OneLess campaign London Drinking Fountain Fund has come on apace in the last few months. With almost all of the 20 new bottle fillers and drinking fountains we donated now installed, one of the last went into Bexleyheath Town Centre. And this installation got us thinking. Or, rather, the words of Londonwide Assembly Member, Fiona Twycross, did.

‘This is a great initiative that will benefit the whole community and help those without a clean or reliable supply of water, as well as people on the go,’ she said. And this seemed slightly bizarre, because who doesn’t have access to a reliable source of clean water these days? Then it twigged. The homeless. 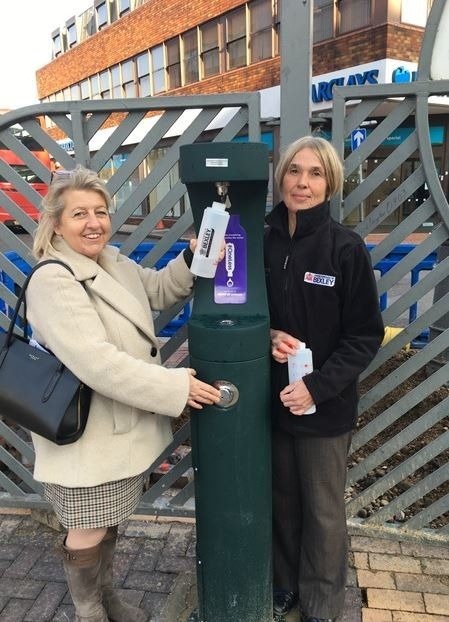 When working on this project to bring drinking fountains and bottle fillers back to the streets of London, the driving force has primarily been to reduce waste plastic. Plastic has become something of an epidemic, with the waste slowly destroying our ecosystem and permeating all parts of the food chain – even humans are inadvertently consuming it. It’s poisoning our oceans and trapping creatures on land and sea. And plastic bottles are one of the most common items of litter in the ocean. On land, it’s not much better. Unable to degrade, plastic just sits there, for hundreds of years, taking up space and suffocating natural growth.

In persuading people to buy fewer single-use plastic drinks bottles, and providing alternative options – in the form of sports bottle refill stations and drinking fountains throughout the city – the aim is to significantly reduce waste plastic. First in London, then throughout the UK. With British adults using around 150 plastic bottles a year, cutting that number could make a massive difference. And that’s amazing. But then, so are the additional side effects.

The provision of drinking fountains and bottle fillers as part of the #OneLess campaign was always meant as a service. The free water was meant to save people money and hydrate them when exercising or just out and about. They might even help to foster a healthier lifestyle, with water being consumed instead of fizzy drinks. But it didn’t ever occur to me that these drinking fountains might be a lifeline to the homeless.

Nearly 7,500 people slept rough on London’s streets in 2017-18. While you think of these poor people being cold and hungry, uncomfortable and often scared, a lack of access to fresh, clean drinking water is probably the last thing to cross most people’s minds. It was for me, anyway.

Clean, easily accessible drinking water is such an integral part of life that we all just take it for granted. Being in a situation where that isn’t the case is unimaginable for me. In fact, the whole of homelessness is unimaginable. Yet, in 2016, Shelter revealed that one in three families were just one paycheque away from losing their home. Homelessness can happen to anyone. It’s a terrifying prospect.

Having access to fresh drinking water is little comfort when facing the enormity of homeless. But if it IS just a little comfort, then that’s a very good thing. And I feel very proud that MIW could be of some little service.