The whole point of the #OneLess project and the London Drinking Fountain Fund has been to promote change. Specifically, to change people’s attitudes and habits when it comes to single-use plastic. MIW has been involved in both campaigns from the off, playing an advisory role, and donating 20 drinking fountains and sports bottle filling stations for installation around London. The hope there is that having access to free drinking water will persuade people to buy fewer plastic bottles. As the project has developed, we’ve found worthy homes for all of our drinking fountains. From Carnaby Street to Guy’s hospital and the Horniman Museum and Garden, the locations have been varied, but Sidcup town centre stands out as a little bit different. It made the list because the town had already started making inroads into reducing plastic waste. 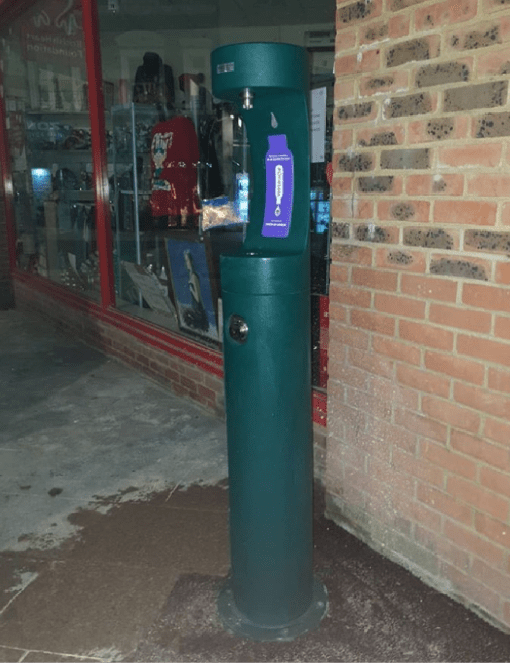 On Saturday 26th May 2018, Plastic-Free Sidcup was launched. Reusable coffee cups and reusable shopping bags were handed out to the public, free of charge. Businesses were also audited to find out where plastic was being used and if it was possible to make simple reductions. And this is exactly what needs to be happening throughout the country if we’re going to succeed in reducing waste plastic nationwide – and protecting the environment globally.

It’s these steps that primarily worked to win Sidcup their free bottle filler and drinking fountain, which was installed in Nisbett Walk. Because how good would it be if we could really make Sidcup plastic free? All it takes is for one town to lead the way for others to follow. And it’s becoming increasingly urgent that they should.

On one day in 2017, 2,500 plastic bottles were collected from the banks of the River Thames. Water bottles were the most common type found. And while the Thames is nowhere near Sidcup, the River Cray – a tributary of the River Darent, which flows northward into the Thames – does flow through the town. It’s not unreasonable, therefore, to assume that some of those plastic bottles could have come from Sidcup. In fact, it’s not unreasonable to assume that some of those bottles came from every place with a river leading to a tributary of the Thames. The River Thames has 51 tributaries.

We’ve reached the stage where 8 million tonnes of plastic enter the ocean from land every year. And it’s destroying our marine life; choking them, trapping them; then moving into other parts of the ecosystem as other creatures feed upon the poor remains. If we don’t work together to stop this, the end result could be catastrophic.

This is why it’s important to support the people and the places that are making a stand and working to cut single-use plastics from their lives. So, three cheers for Sidcup. Long may your good work continue. And long may you enjoy your Halsey Taylor 4400BF – Endura II Tubular bottle filler, which has been designed specifically fo outdoor use. It’s weather-proof, vandal-proof, easy to use, filtered and finished with silver-ion anti-microbial treatment for enhanced hygiene.