Surfing the Wave of Change in Snowdonia

It’s people who love the sea who first noticed the impact that plastic waste was having on the planet, so it’s hardly surprising to learn that a surf activity centre should be taking active steps to reduce the plastic used in their facilities… Even if they are based on top of a mountain. Well, kind of. 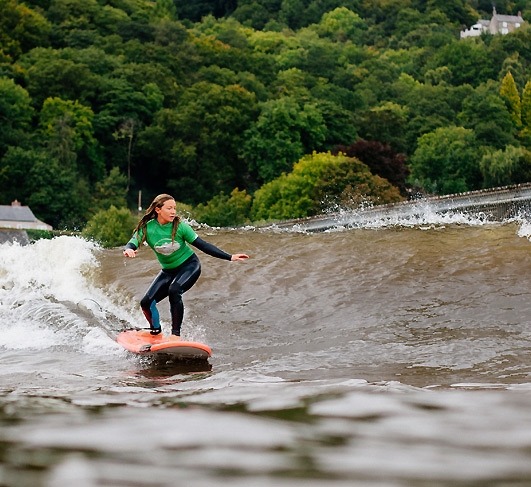 When Surf Snowdonia opened in 2015 it attracted a huge amount of media attention – not least because of its stunning location in north Wales’ Conwy Valley in the lee of the Snowdonia mountains. But while its location is breath-taking and the technology behind it not much less so – a wave pool large and, erm, wavy enough to accommodate a Pro Surfing Challenge in the middle of a mountain range – what a lot of people aren’t aware of is the site’s green ethos and credentials.

Before the wave pool (which description really under-sells a site 300 metres long and 110 metres wide, holding six million gallons of water and able to generate a wave two metres in height which can last 16 seconds and travel 150 metres, but anyway…) was constructed a serious amount of site decontamination took place, and during construction over 25,000 cubic metres of on-site material was crushed and re-used, recycling 400 tonnes of steel, cast iron and copper. My point is that this is a site – and management team – that appreciates the value of the environment. Working to further build upon those green foundations, this spring, before the start of the new surfing season, Surf Snowdonia asked MIW to install a filtered drinking fountain and bottle refill station for their customers to use free of charge, rather than purchasing plastic bottled drinks from the café.

And that’s the reason that this is significant – like most public attractions, a good percentage of the site’s profit comes from visitor consumables; food, drink and the like. In providing free drinking water, they’re cutting off a decent revenue stream, but they’d rather do that than continue to contribute to the problem of plastic waste.

“Anyone who surfs in the ocean will have experienced the unpleasantness of litter pollution, and these days more and more of it is plastic,” explains Surf Snowdonia MD, Andy Ainscough. “We all have a responsibility to put that right, not just for our benefit, but for the benefit of the creatures who live there.

“Providing free filtered drinking water to our customers is maybe a small gesture, but we can accommodate up to 1,000 guests a day in peak season and we’re rarely below 97% capacity. If even half of those people use the refill station rather than buying bottled drinks that’s a huge reduction of plastic, which will make the fountain rental a worthwhile investment.’

Like many other companies taking the decision to put the environment over profits, Surf Snowdonia are renting their Halsey Taylor indoor bottle filing station and drinking fountain from MIW, availing themselves of the free fitting and routine servicing that comes as part of the low-cost rental contract.

If you’re interested in following suit and doing your bit for the environment, just give us a call – our sales team are always free for a chat: 01207 572 000.