The amphitheatre of the Swizz Cottage Open Space is one of the gems of Camden. Regenerated in 2006, it is bright, clean and appealing, with the gentle sound of running water to soothe the senses and promote relaxation. It is loved by picnickers and families, and regularly used for local events and open-air exercise classes. All of which, made it an excellent choice for hosting one of MIW’s donated bottle filling stations, as part of the #OneLess London Drinking Fountain Fund.

Selecting venues has been quite difficult for the #OneLess team and their counterparts in the London Mayor’s Office. There’s been a lot of competition, with a pleasingly high number of councils, organisations and businesses wishing to get involved. The trick has been to find locations where the drinking fountains and bottle fillers could make a real difference. Both to the environment and the communities they serve. It’s this that made Swiss Cottage Open Space such an outstanding prospect. 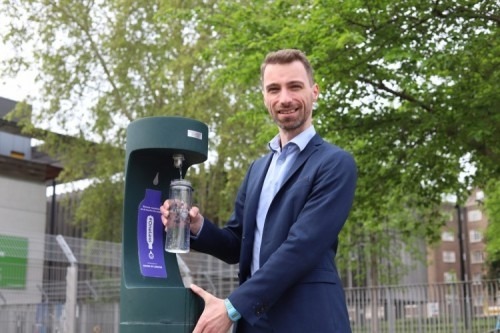 The area already has extensive facilities – outdoor gym, play areas for children, a walk-in fountain and plenty of green space. But the one thing it lacked was fresh-flowing drinking water. Nearly 13,000 people live in Swiss Cottage, and if even a quarter of them use the park, that creates a huge potential for litter. With all this exercise going on, people get thirsty, and while most people will be responsible, many won’t, which means that the area was prone to waste plastic bottles. In providing free drinking water, the hope is that from now on, most of those waste plastic bottles will be left behind – in the shops and homes that they originally came from.

Seeing how these bottle fillers have been embraced by the communities that have received them has filled me with such positivity. Until quite recently, if people even acknowledged the problem of plastic waste, it was usually with a sort of defeatist shrug. ‘Yeah, we know it’s bad, but what can we do? We’re never going to be able to stop everyone from using plastic.’ But the thing is, that’s exactly what’s happening. Of course, not all plastic is being set aside – but not all plastic needs to be. What’s important is that we’re slowly – but very surely – reducing the amount of damaging single-use plastic that is being made, used, and poorly disposed of. And anyone who uses one of the #OneLess bottle fillers and drinking fountains is part of that.

It only takes a tiny change to make a big difference. And what we’re all – every one of us – is doing now, could make the difference between a choked up dying world, and brighter, more vibrant and diverse one. The difference between a future with an ocean empty of life, and one teeming with creatures both known and as yet undiscovered. And we’re all doing it #OneLess bottle at a time. Isn’t it wonderful to be part of something bigger than ourselves?

And the really exciting thing is that there’s so much more to come. The Swiss Cottage drinking fountain is just one of 20 that MIW is currently helping with. The London Mayor has recently announced that there could be another 100 to come. And that’s before we’ve even left London. Let’s keep going and see what change can really look like!