The Pee Test – Are YOU Drinking Enough Water?

If statistics are to be believed – and I have to admit to struggling with this one – 7.2 million British adults don’t drink a glass of water on a daily basis. 7.2 million! That’s more than 10% of the population. I can’t imagine going through the day without half a dozen drinks of water, let alone not having a single one. What do these people keep by their bedsides, for goodness sake? Astonishing.

According to The European Food Safety Authority, women should drink roughly 1.6 litres of fluid each day and men should consume 2 litres. Given that the human body is approximately two-thirds water, not drinking enough can have serious health ramifications, from migraines, headaches, and concentration-loss to kidney problems. So, how can you tell if you’re drinking enough water? It’s as easy as one, two, pee…

Apart from actually experiencing a sensation of thirst, the quickest and easiest way to find out if you need to drink more is to take a look at the colour of your urine.

What Your Urine Can Tell You About Your Hydration

The basic rule is that the clearer and lighter your wee, the more healthily hydrated you are.

Urine is a sterile liquid, which helps rid the body of harmful toxins. At its best, it is translucent yellow, and the darker it becomes the stronger the indication that your body is in need of a liquid top-up.

Now, I’m not going to sit here and attempt to describe the various shades of yellow – with more than 13,000 different varieties of daffodils and 600 species of buttercup, I could give you quite the wrong idea! – but suffice it to say that if your pee looks more like tea than weak lemon squash, then you should probably be drinking more. The below handy colour chart from U18 Sports Medicine gives you a better idea than my attempt at purple prose ever could. 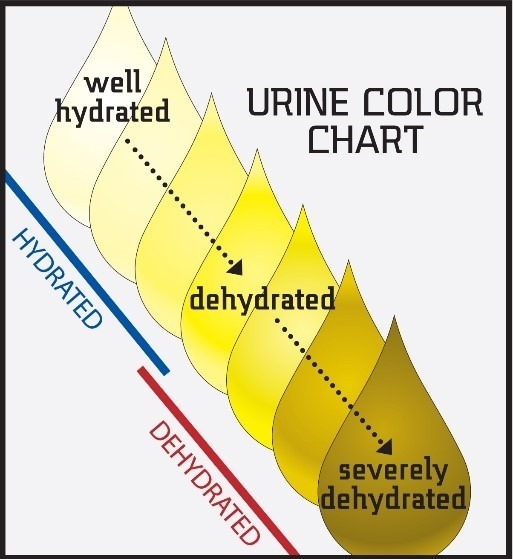 Of course, hydration isn’t the only factor that can influence the colour of your pee: if you’ve been eating beetroot, rhubarb or blueberries, then there’s a strong chance that your wee could be a muddy red; if you’ve been eating asparagus you could produce green pee, with a strong and unpleasant odour; or more seriously, if your urine is very dark or syrupy you could have a problem with your liver or bile duct, so if the colour persists it’s worth speaking to your GP. For most of us, however, the problem is caused by low fluid intake.

In October 2017 it was revealed that most children drink just a quarter of the water that they should during the school day, while only 20% of adults drink the recommended amount. As a head master or business owner, you could help to counter this, with the provision of water coolers, drinking fountains and sports bottle refill stations.They don’t cost a lot, but they can make a real difference.

Dehydration isn’t just physically bad for you, but it can hinder performance in a wide variety of ways, while making you feel, frankly, awful. To be your best – and to pee your best – aim for 6-8 drinks a day, and for optimum hydration, try to make sure that at least half of them are water.