The Village Pump Returns to Freshford

For most of us these days, living without hot and cold running water in our homes is unimaginable. And yet not so long ago – within the last hundred years, in fact – many British homes relied on hand-pumped water. Lavatories were external. Hot water was heated manually. And, for some, cold water was fetched in, in a bucket from the communal pump. Although a significant step up from the well, and delivering sanitary, piped water, it was still a far cry from the way that we live today. While absolutely no one can be nostalgic for those days, there is something slightly romantic about the idea of a village pump. It’s somewhere to meet and chat; a place to bring a community together. And it’s that sense of community that is being revived in a small Somerset village called Freshford.

Now, the people of Freshford obviously haven’t all gone mad and decided to eschew their contemporary plumbing in favour of a vintage pump. Instead, they’ve taken the thoroughly modern step of installing a public drinking fountain and bottle refill station at the community café and shop.

Opened by HRH Prince Richard the Duke of Gloucester, the new bottle filler (AKA The Village Pump) was installed as means to help cut waste plastic. Both locally and globally. Inspired by Sir David Attenborough’s call to action in the BBC’s Blue Planet II, the community was looking for a way to do their bit. Funds were raised by villagers, and Wessex Water chipped in £500 as part of its celebrations marking the 25th anniversary of Watermark – a scheme devised to support community and environmental projects… MIW had the privilege of carrying out that installation. And this is exactly the kind of project that we love to work on.

Bottle filler installations are always encouraging for us, because it feels like we’re making a difference; joining the fight to cut 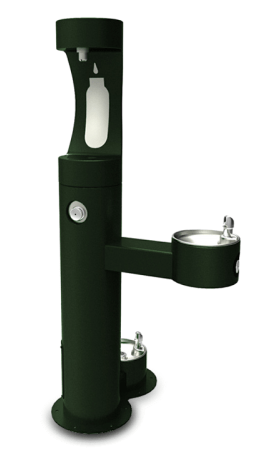 waste plastic. But the most heartening thing about Freshford’s Village Pump is the way in which it has been received by children. Kids from local schools were in attendance at the opening. Despite the fact that it’s essentially a glorified green metal tube delivering water – something these kids have always been able to get whenever they’ve wanted it – they seemed very switched on to the idea behind the bottle filler. Many of them would have seen the terrifying degree of the waste plastic problem on television. Others simply want to do their best to protect the planet and the creatures we share it with. And if we can encourage this mindset, and get children to adopt greener habits – refilling rather than repurchasing – they will hopefully carry them with them into adulthood. And that’s where change really begins to happen.

The Freshford Village Pump – a Halsey Taylor 4420-BF1U – Endura II Tubular outdoor bottle refill station has been designed to stand the test of time too. It’s weather-proof, vandal-resistant, hygienic and easy to use. It also requires very little maintenance. It should grace the Galleries in Freshford for very many years to come. And all the while it will be contributing to a global sea change and helping to stem the tide of single-use plastic.