When you think of solving the plastic waste problem with public water dispensers it’s easy to have a defeatist attitude. What difference can a single bottle filler make? It’s like trying to bail out an ocean liner with a teaspoon! And that’s understandable. The problem is vast. And a bottle filler or drinking fountain can only serve so many people – particularly as many people don’t yet think to use them. BUT, when people do start to use them and one bottle filler turns into a network, that’s when you start to see a difference. A 120,000 plastic bottle difference. And that’s what’s happening in Scotland. 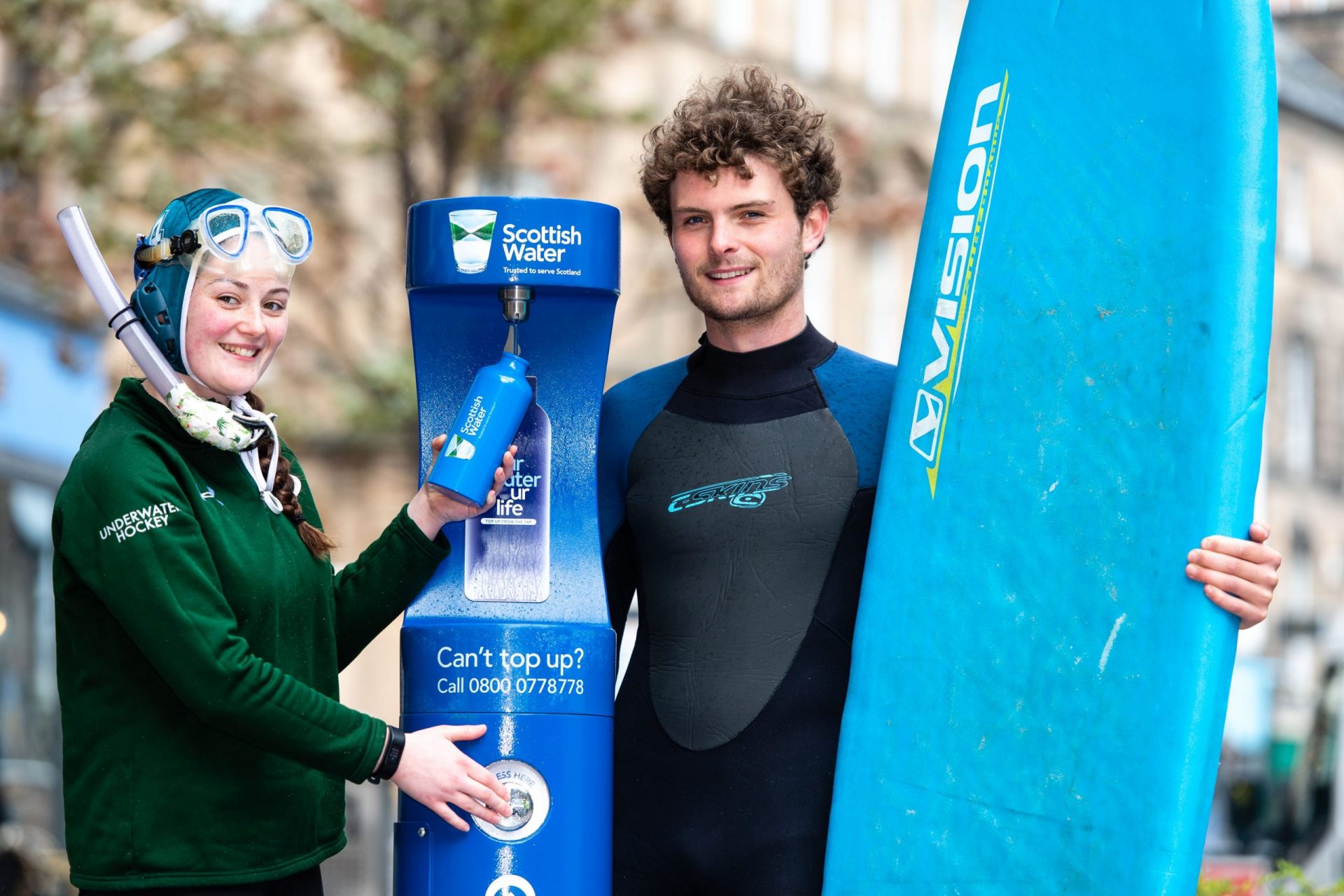 In 2018, MIW was contacted by Scottish Water’s Your Water Your Life campaign team. They were looking for ways to both increase public water consumption and reduce the number of single-use plastic bottles going to waste throughout Scotland. The plan was to install 35 bottle fillers at strategic points throughout the country. And they wanted MIW Water Cooler Experts to recommend equipment, customise it and help with site assessment before installing it.

A lot of groundwork needed to take place, particularly when it came to deciding upon the perfect locations. But in October 2019, the 13th Top Up Tap was installed in Stirling’s Port Street. And with the unveiling came the tremendous news that the other 12 bottle fillers belonging to campaign had already dispensed a whopping 40,000 litres of water. That’s the equivalent of 120,000 standard 330ml single-use plastic bottles.

When you get to those sorts of figures, the teaspoon analogy no longer feels quite so germane, does it? 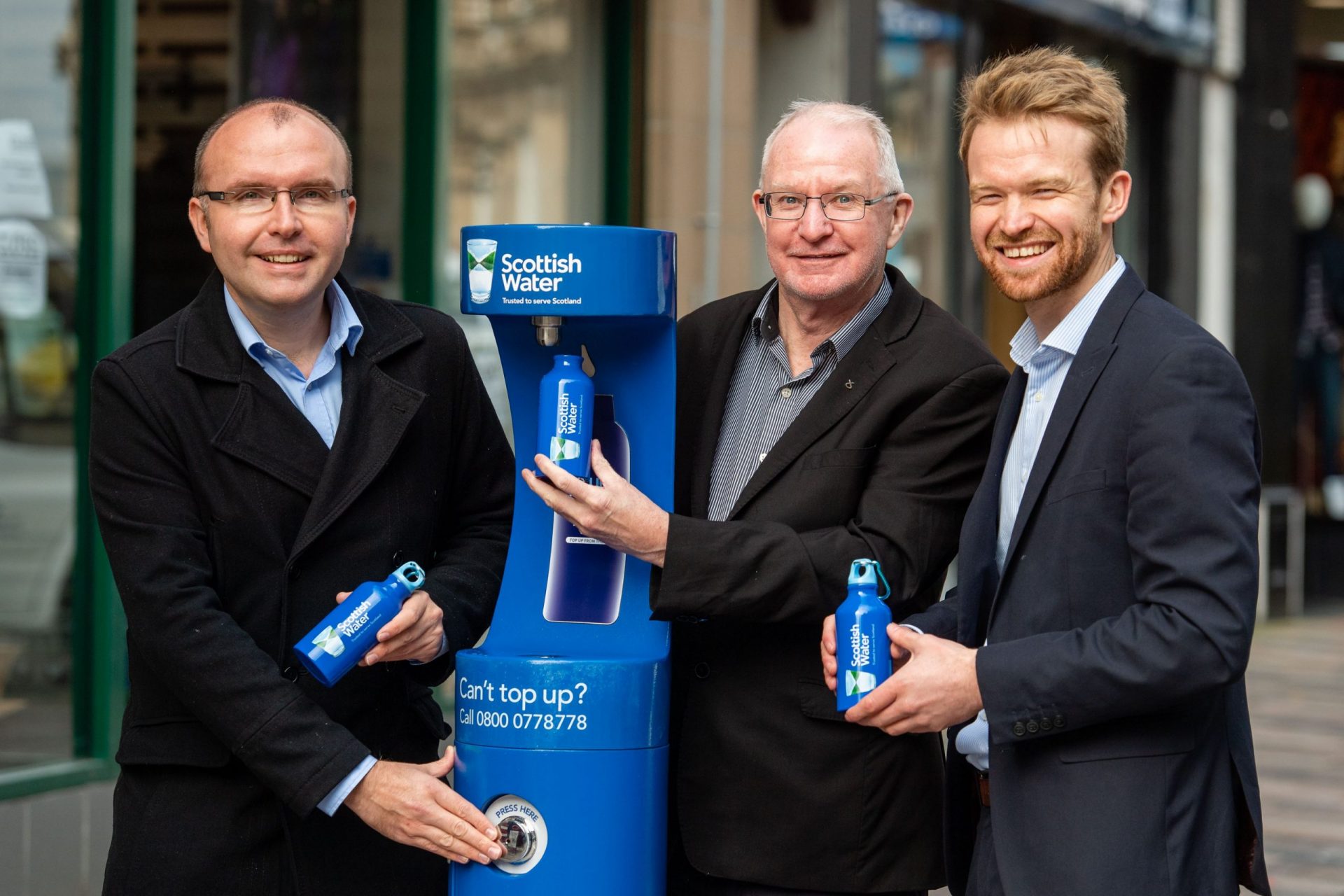 MIW has been working with various water authorities for years now. So, by the time that Scottish Water approached us we already had a pretty good idea of the sort of equipment that they would need. Having worked through their brief and ascertained the finer details, we recommended the Halsey Tailor Endura II 4400BF pedestal bottle filling station.

WRAS-approved, the Endura II fully complies with all water authority and Government health and safety guidelines. It’s weather-proof – an obvious must for anything being sited outdoors – and its solid, stainless-steel build makes it incredibly durable, to the point of vandal-resistance. The unit is also very easy to use – just pop your bottle beneath the faucet and press the release button – making it accessible to practically everyone.

Prior to installation, MIW has been able to customise each bottle filler, adding Scottish Water’s bespoke colours and livery, and integrating additional thermal protection where locations dictated the necessity.

Why top up from the tap?

At the beginning of 2018 it was estimated that around 8 million tonnes of plastic entered the ocean from land every year. The primary aim of refill point installations, like those being carried out by MIW on behalf of Scottish Water, is the reduction on of that marine litter. As well as further environmental impact.

If we can get marine waste under control, it’s something that all of us will benefit from. That’s why Scottish Water’s Top Up Taps have been so well received. For the launch of Stirling’s new refill point locals turned out to celebrate, including members of the University of Stirling’s Surf Club, students from the Underwater Hockey Club, Sub-Aqua Club and the university’s Marine Conservation Society. And this is great news, because a culture change is needed if we’re going to truly combat waste plastic. And it’s the young who will make that happen… And together we can turn that teaspoon into a gargantuan syphon!