Carnaby Takes 70,000 Plastic Bottles Out of the Environmental Equation

Don’t you just love a good news story? And this is a magnificent one.

By mid-September 2019, that bottle filler had delivered the equivalent of 70,000 bottles of water. 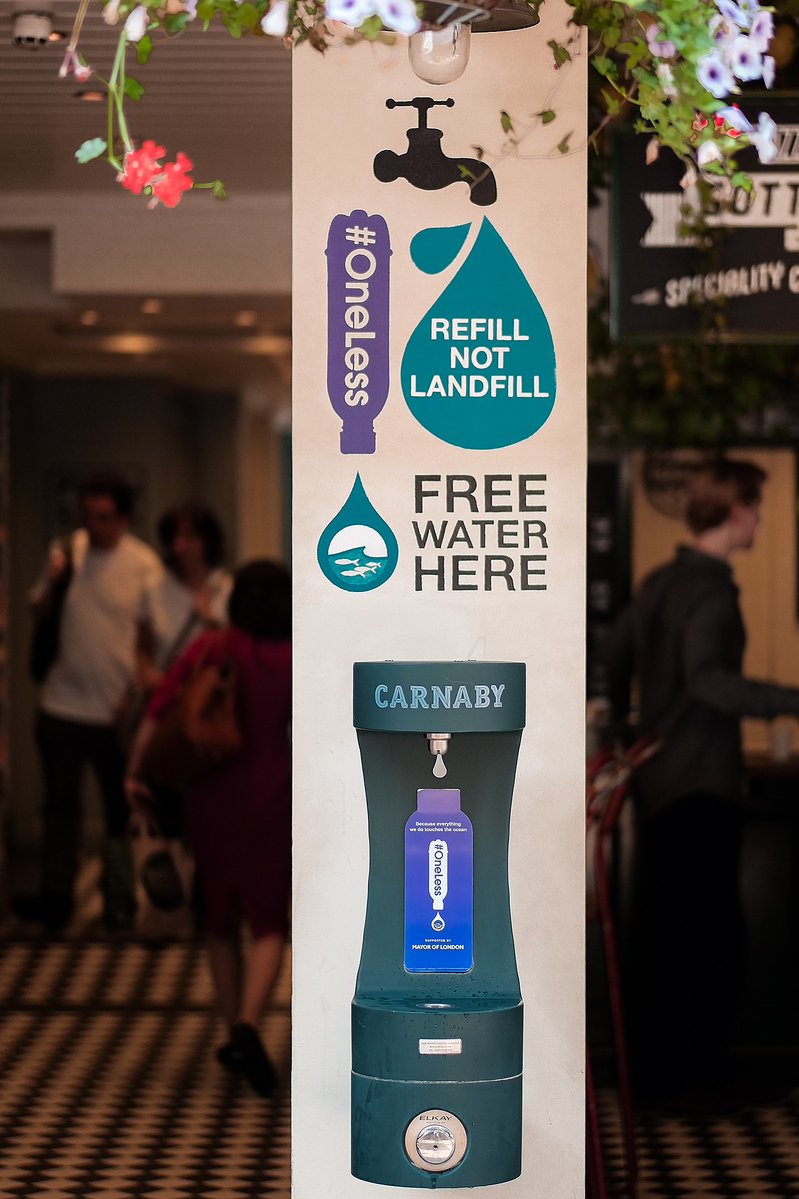 Can you even image how many bottles that is? Can you imagine the impact those bottles may have had on the environment if they’d been purchased from a retailer rather than refilled? It’s breath-taking. It’s mind-boggling. And, oh, it’s happy-making! What a difference one bottle filler can make.

The story of the Carnaby Street bottle filler

Right from the start, the Kingly Court bottle filler – a Halsey Taylor Endura II – was an exciting installation for us. It was the first of the 20 units we’d donated to the #OneLess Project, the leading movement to reduce plastic waste in London. Working with #OneLess and the Mayor of London, MIW helped to launch the London Drinking Fountain Fund, and through the following months we went on to install bottle fillers in key points around the city. The aim being, of course, to encourage a refill culture and start the UK on a journey to cut out plastic bottles.

Kingly Court (owned by Shaftesbury Land), was chosen as the site for the inaugural unit. It’s both central and hugely busy. And as one of the West End’s key attractions, Carnaby Street appeals to both Londoners and tourists. And for everyone involved in the project, it was to be a kind of barometer. While we all believed that the project could be a success, it would be Kingly Court that would tell us, definitively, if it was.

A lot of thought went into the selection of the Kingly Court bottle filler. We didn’t just want to provide drinking facilities, but to encourage as much use as possible. To do this, the unit had to be attractive and easy to use. It needed to be accessible to as wide a range of people as possible – so a wheelchair accessible unit with hands-free operation was essential. Being sited outdoors in a public area, it also needed to be both weather-proof and vandal resistant. Finally, as a public amenity, the bottle filler needed to comply with all Government and water authority guidelines. But as MIW specialises in WRAS-approved equipment, that was the least of our concerns.

The Halsey Taylor Endura II tubular outdoor bottle filler delivered all of this and more. It seemed the most obvious choice for the job. And it looks like the public agrees!

MIW’s work with the #OneLess bottle campaign has given us so much satisfaction, in so many ways. That’s one of the reasons – along with a deep belief in the importance of the work – why we continue to support the project with its new Hello London initiative – a campaign devised to invite both locals and tourist to ‘say goodbye to ocean plastic and enjoy water the London way’. Working, as we are, on that, there will surely be much more job satisfaction to come…