Back in July 2018, MIW worked on an exciting project installing two public bottle fillers and drinking fountains at London’s Liverpool Street Station. It was part of the work that MW had undertaken on behalf of the #OneLess project. Working in conjunction with the London Mayor’s office, MIW had donated 20 bottle fillers and drinking fountains to the project, to be installed at prime locations across London. The work was to become known as the London Drinking Fountain Fund. The bottle fillers at Liverpool Street Station were only the second and third of the venture to go in. Enthusiasm was high.

Two Elkay EZH2O Bottle Filling Stations were selected. Being quick, clean, durable and vandal-resistant, they were the perfect units for the job. They were also customisable, meaning that we could install an electronic counter on them, allowing us to see how much they are used. And that was really the big question that we needed answered. 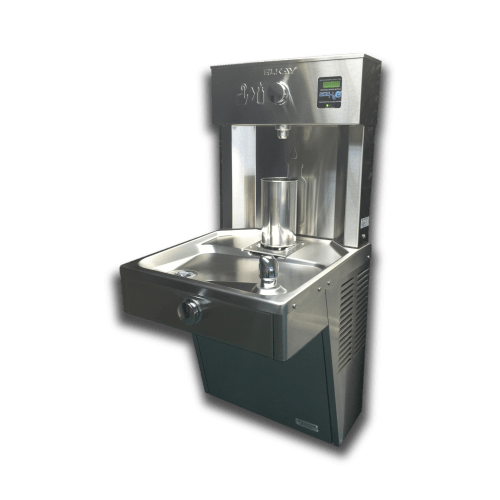 The bottle refill stations were installed to help reduce plastic waste. Not just in the station, but throughout London and the UK. The aim of the project is to stop such vast quantities of plastic waste ending up in our waterways. Because, with around 8 million tonnes of the stuff ending up in the ocean each year, something really needs to be done. Joining the #OneLess project and donating the drinking fountains to the London Fund was us doing something. But…

This is why we think they can.

– 65% of UK adults say that they would not buy bottled water if tap water were available. Which is great, but the proof has to be in the pudding.

– In the first month after installation, the two drinking fountains MIW installed at Liverpool Street Station dispensed more than 8,000 litres of water.

– Multiply that figure by 10 to cover all 20 bottle fillers MIW donated to the fund. That leads to a potential 160,000 bottles saved every month.

And that is no small achievement. At this point, we only have the data from the first month of Liverpool Street Station’s bottle fillers to work with. But my goodness me, it’s encouraging data. It takes time for any new feature of a location to be discovered. And the longer the bottle fillers are there, the more people will find them and start to use them. And this is such great news for the environment.

If you look at a problem, like waste plastic, as a whole it can seem insurmountable. If you tackle it in multiple tiny steps, one bottle at a time, the challenge isn’t easy, but it becomes manageable. It just takes team work. So, when are you going to play your part?