In summer 2019 the MIW team were involved in an exciting project to bring a ‘rehydration station’ to a pioneering new concept store for Boots. The Boots ‘store of the future’, based in Covent Garden, was devised to bring a new, greener way of shopping to London. Road-testing 32 new sustainable health and beauty brands, completely removing all plastic bags, and installing a water bottle refill point (hence MIW’s involvement), the store led the way in sustainable retail. And it’s proven such a hit with customers that Boots UK has now taken the concept to Meadowhall in Sheffield.

Meadowhall’s Boots ‘store of the future’

Opened in October, the new Sheffield Boots store replicates all of the ideas and practises first trialled in Covent Garden. It is sleek, undeniably stylish and stocks more than 300 beauty brands, making it a must-see destination for fashionistas of all ages. It offers innovative new customer experiences – including ‘fast lanes’ and secure lockers for pharmacy pick-ups – and access to expert advice, which will appeal to the broader market. But it also has a green ethos running through its core. And part of that is a pledge to reduce waste plastic on site. The move to paper bags over their plastic counterparts is a significant step towards that. The installation of a rehydration station is another. 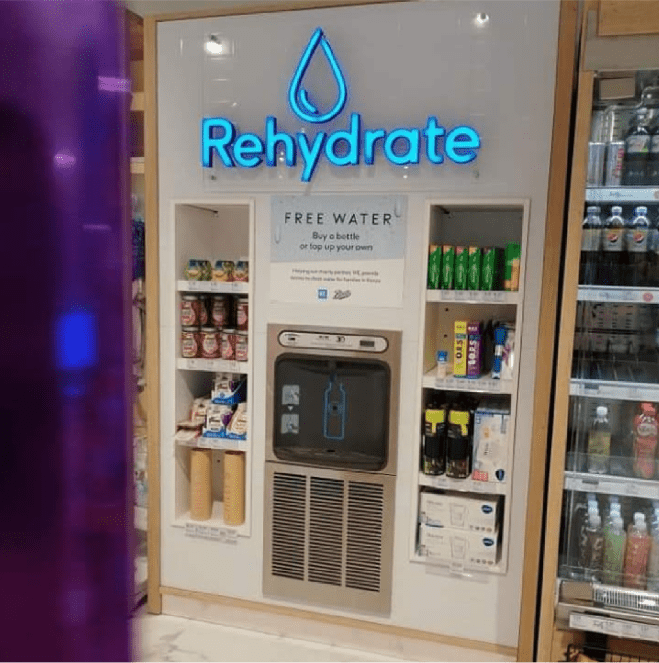 As with the London Boots ‘store of the future’, a Halsey Taylor HTHB8-WF – HydroBoost In-Wall Bottle Filler was selected for the Meadowhall installation. WRAS-approved, it is safe, hygienic and compliant with all water authority and Government standards. Made from stainless steel, it’s highly durable. The hands-free operation doesn’t just make it easy to use for everyone, but combined with the comfortable installation height, also makes the unit as wheelchair accessible as possible. And the water provided is both filtered and chilled to ensure optimum enjoyment – and hopefully maximise user appeal. Finally, an inbuilt bottle counter allows both the public and staff to see just how much the unit is being used.

The future of retail

The whole idea of both the Meadowhall and Covent Garden Boots concept stores is to test the water and see if the public will buy into a more sustainable shopping experience. Boots UK aren’t alone in this. MIW is already working with a number of other companies – including The Body Shop and Adidas – trialling similar models. But Boots is such an enormous brand. With 2,500 stores to its name, Boots is one of the biggest retailers in the UK – there’s barely a British town where Boots is not present. So, if Boots customers will take up the refill challenge, what a boost it would give to the sustainability movement.

With each UK adult using around 150 plastic bottles every year, there’s little surprise that they are  one of the most common items of litter found in the ocean. Every single time we refill rather than replace, we’re helping to make a difference – to reduce that statistic for the future. Destination stores like Boots Covent Garden and Meadowhall are playing their part, helping to make that difference. But wouldn’t it be nice if rather than being ‘concepts’ they were simply ‘stores’, because sustainability had become the norm, rather than the anomaly?

Find out how MIW could help your company contribute to the refill movement.