Anyone living around Bedford will no doubt be aware of the recent redevelopment of the Harpur Shopping Centre. But along with the shiny new facades and rejuvenated facilities have come serious steps to improve the site’s sustainability. A new recycling area has been installed within the centre and now, thanks to a collaboration with Bedford Borough Council and Refill Bedford, the Harpur Centre has joined the refill movement in a bid to cut plastic waste. MIW Water Cooler Experts was called in to help with the project. 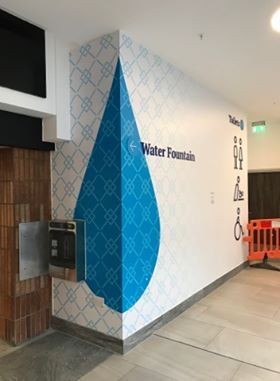 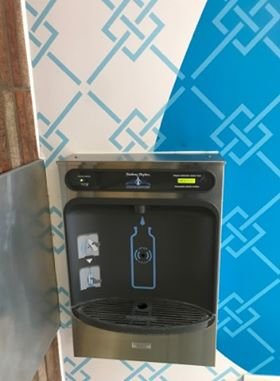 In March 2019 Bedford Borough Council declared a Climate Emergency. Deeply concerned by the environmental issues the world is currently facing, council members pledged to take action. The first priority was to make the council carbon neutral by 2030. But this has triggered a wealth of other new sustainability policies, including a movement to reduce waste plastic with the installation of refill points. The council offices led by example with their own bottle filler installation. Shortly after, the Harpur Shopping Centre became one of the first businesses to sign up to the initiative.

“We immediately signed the Harpur Centre up to the Refill project,” explains Harpur Centre spokesperson, Samantha Laycock. ‘And since its installation [in October], we have already saved 3,759 bottles according to the counter on the fountain[1].”

The purpose of the Harpur Shopping Centre’s new refill station is obviously to encourage as much use as possible. With more than 8 million people visiting the centre every year, an awful lot of plastic drinks bottles are used on site. A water dispenser should provide a viable alternative for customers. So, the greatest part of the brief for MIW was to find a unit capable of serving a high number of users with great-tasting water. But, on top of that, the bottle filler needed to be safe, easy to maintain, easy to use, and accessible to as wide a number of people as possible.

WRAS-approved for guaranteed safety, the Halsey Taylor HydroBoost HTHBSM-WF wall-mounted bottle filler answered all of those requirements. It has been specifically designed for wheelchair accessibility and has hands-free operation to make it as easy to use as possible. It has a rapid refill rate with laminar flow to reduce splashback, while active drainage takes care of any customer spillages. This helps to minimise daily maintenance. The unit is filtered to provide the very best tasting water available. And its sleek, wall-mounted design means that it could be integrated into the Harpur Shopping Centre without any concerns over causing obstructions or disrupting the flow of foot traffic.

Refill while you shop

The Harpur Centre isn’t the only shopping destination to switch on to the importance of offering alternatives to plastic. MIW is already working with a number of busy, high-profile shopping destinations around the country to the same ends. Intu in Derby, Highcross in Leicester and Glasgow’s Bon Accord, are among the growing number of shopping centres making sustainability pledges. And while a single bottle filler here and there might not seem so significant, every single one is adding to the national network. The more bottle fillers and drinking fountains to hit our shops, streets, organisations and transport hubs, the sooner a refill culture will take hold. And the sooner that happens, the sooner change will be made, freeing our environment from the scourge of waste plastic.

You can find the new Harpur Shopping Centre bottle filler by the new high specification toilets.

[1] Figures related to less than one month’s use.